I arrived in Washington, DC on Friday evening to meet with 13,000 other biological scientists for the Experimental Biology 2011 meeting and just got home Wednesday night.

I was there to give a 15-minute presentation on how I fed an overdose of fructose to a couple dozen rats and it didn't do any of the nasty things I expected it to.  You'll be hearing lots more about fructose from me in the near future as I try to figure out what happened.

One of the coolest presentations I saw was a talk Peter Friedl of the German Nijmegen Center for Molecular Life Sciences gave entitled "Dynamic imaging of cancer invasion, plasticity, and resistance."  This was the first talk I saw of the conference, on Saturday morning.  Friedl showed textbook images of cancer metastasis, which show isolated cells dropping off from a cancer and then making their lonely but merry way to invade other tissues.  Then he showed videos proving it was false. 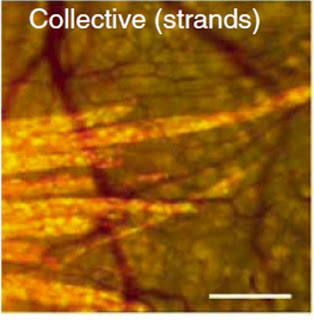 Those bright strands  are highly organized projections made up of individual and continuously dividing cells.  A minority of their expansion is due to the fact that they are traveling forward, led by a small cluster of a few cells or sometimes an individual cell at the tip, while the majority of their growth comes from the fact that they are actively dividing, pushing forward as they do so.

Sunday I gave my own talk and later I was student chair of the fourth Dietary Bioactive Components session, focusing on antioxidant and anti-inflammatory compounds.  Little did I realize that the job of the student chair would be to manage the twitter feed.

And of course there was way too much stuff going on at this conference for anyone to possibly see it all, so check out the #eb2011 hashtag on twitter to find other tweets and blog posts, or maybe search Google.

The best talk I saw was on Monday.  Paul Kubes of the University of Calgary gave a talk entitled "Sterile versus infectious inflammation... an identical immune response?"  Kubes has a hilarious sense of humor, which livened up the talk a bit, but the content was simply astounding.  In his presentation he showed that immune cells called neutrophils respond to bacterial infection by spilling out their DNA to form webs that catch bacteria.

Here are some neutrophils: 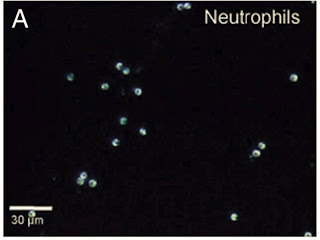 
When they are exposed to Staphylococcus aureus, they start spilling out their DNA, shown in green: 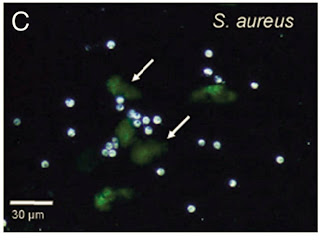 Over time, these nets greatly expand: 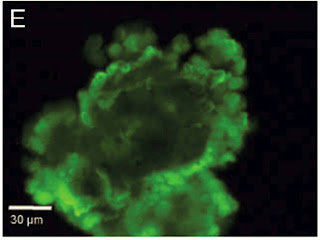 Through electron microscopy we can see that these DNA-nets form lattice-like webs that catch Staph aureus just like spider webs catch insects: 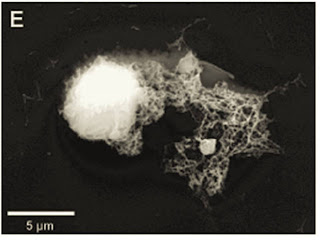 Other images show that these nets protrude out of a small bubble on the surface of the neutrophil's membrane, kind of like how Spider Man shoots webs out of his wrist.

What was particularly amazing was watching live streaming video of this process, where the denucleated neutrophils could be seen crawling around eating the bacteria they had caught in their DNA-webs.

Conclusion?  Neutrophils are kind of like spiders.  Err, I guess they are kind of superheroes so maybe they are more like Spider Man.

Although, this Lady Gaga rendition sums it up rather succintly:

On Tuesday, I went to a special session put on by the Institute of Medicine's Food and Nutrition Board (FNB) about the new DRIs for calcium and vitamin D.  They focused mostly on vitamin D.  Presenters included the chair of the FNB, Dennis Bier, the director of the FNB, Linda Meyers,  the chair of the committee that wrote the vitamin D report, Catherine Ross, and several other people involved in writing the vitamin D report such as Christine Taylor, Patsy Brannon, and Susan Mayne.

Mayne, a cancer epidemiologist from Yale, discussed a list of what she considered myths floating around the internet and elsewhere about the vitamin D report: 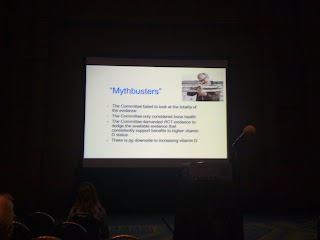 And here are the facts, as she saw them: 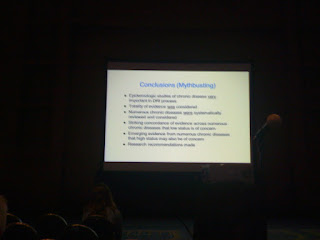 I apologize the photos are kind of blurry.

Regardless of whether the IOM's FNB got the best estimate of the vitamin D requirement exactly right, I agreed with the gist of Payne's talk.  I got the impression as soon as I started reading the 999 page report that there was an awful lot of misunderstanding about the report and its purpose.

When I'm done reading it, I'll post my analysis on my other blog, Mother Nature Obeyed.

She told me the moderated question and answer session produced quite a lively debate.

The best part of the conference was meeting new friends.  I met nutrition journalist David Despain on Saturday night.  Here's a picture of Melissa, David, and me parting at the subway after chowing down on some delicious Mexican food together: 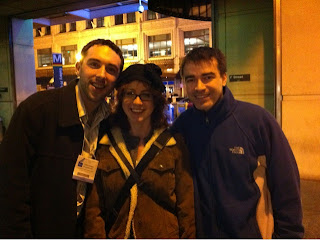 Without love and friendship, science would be pretty boring.


Posted by Chris Masterjohn at 9:45 PM